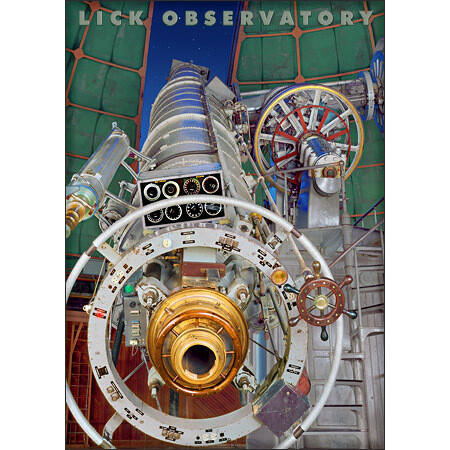 This magnet features a glossy weather resistant protective covering, rubber magnet, plastic backing, and high quality color printing. It is made and sourced in the USA using at least 60% recycledAmerican steel, and is 100% recyclable.

Considered to be an irreplaceable national astronomical treasure, the Lick 36” Refractor saw first light in 1888. At that time it was the most powerful telescope on earth. It remains the world’s second largest refractor. For over a century many significant discoveries were made, such as that of the fifth moon of Jupiter in 1892. In late summer of 2003, and again in fall of 2005, the close approach of Mars was studied and recorded. This impressive instrument is frequently used for public viewing and educational programs.

As twilight approaches, bright daytime sky reflections on the telescope gradually transform with the darkening sky into deep, intensely saturated blues. To ensure precise focus from foreground to background, an aperture of f/45 on 100 ISO film necessitated an exceptionally long, unenhanced 25-minute time exposure. Recorded here is the elusive transition when stars begin to appear, yet the ultramarine sky and its brilliant reflections have not fully given way to darkness. A bank of photographic lights illuminate subtle details of telescope, pier, and dome, features otherwise not easily discerned as the muted interior eases into night. An additional 30-second exposure of the sky was also shot and then digitally composited in the original photograph to more accurately represent the stars as perceived by the human eye. Polaris (North Star) is visible in the dome slit just above the telescope.

A 5’x7’ photomural version of this image is installed in the Explore the Universe Exhibition, Smithsonian National Air and Space Museum in Washington D.C. It is a trompe l’oeil (fool the eye) backdrop on which the famous 1894 Brashear “Mills Spectrograph” is displayed. (The instrument is not shown here.) My assistants and I thank NASM for their initiation and support of this endeavor. A percentage of proceeds from sales of this picture will be dedicated to preservation of the Great Refractor and to enrichment of visitor programs.

Digital drum scans from the original film frames were composited and corrected in Photoshop.

The photographer extends sincere gratitude to the Smithsonian National Air and Space Museum, Steve Lawrence, Anthony Marino, and University of California Observatories | Lick Observatory astronomers, staff, and friends for their generous and invaluable assistance in producing this photograph.