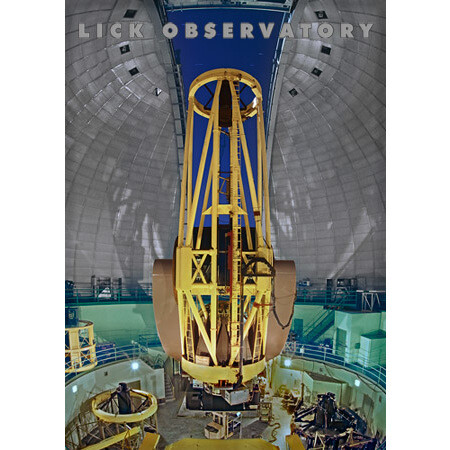 This magnet features a glossy weather resistant protective covering, rubber magnet, plastic backing, and high quality color printing. It is made and sourced in the USA using at least 60% recycledAmerican steel, and is 100% recyclable.

The Shane 3m Reflector was the second largest telescope in the world when it was completed in 1959. It bears the name of former Lick Observatory director and astronomer Donald Shane, who spearheaded its development. The mirror was originally a test blank for the Palomar 200" Reflector, then the world’s largest telescope. (Pyrex glass was invented specifically for use in these mirrors.) Although the Shane is modest in size by current standards, state-of-the-art research progresses in several fields, including adaptive optics and laser guide-star programs. Using the incomparable Hamilton Spectrograph, the Shane is a leader in discovering planets orbiting nearby stars.

A digital perspective correction filter was subsequently applied to the image file to restore fisheye distortion to a rectilinear view.

The photographer extends sincere gratitude to University of California Observatories astronomers and staff for their generous and invaluable assistance in producing this photograph.