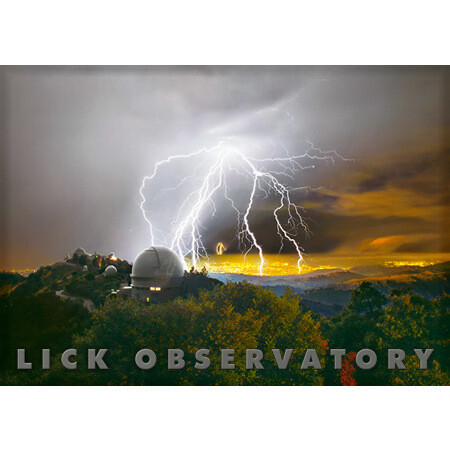 This magnet features a glossy weather resistant protective covering, rubber magnet, plastic backing, and high quality color printing. It is made and sourced in the USA using at least 60% recycled American steel, and is 100% recyclable.

In this one-minute time exposure looking west from Kepler Peak, a turbulent cloud hurtles lightning into Mt. Hamilton foothills. Across Silicon Valley, more bolts shock the Santa Cruz Mountains twenty miles away. Thunder rumbles across hillsides announcing repeated strikes. Sheets of rain drench valley neighborhoods. It is a spectacle of rare intensity on Mt. Hamilton, and one that will continue past daybreak. Domes remain closed for the duration of the storm, shielding telescopes from the assault.

On the evening of September 8, 1999, a massive storm system engulfed the greater San Francisco Bay Area. My astronomer husband Rem Stone and I watched from the southern window of our home on the summit of Mt. Hamilton as a behemoth fast-moving cell advanced north like a juggernaut toward San José. Clusters of lightning pulsed from its dark belly. We grabbed my camera gear and raced to a windy vantage point on Kepler Peak. I began to shoot one minute exposures of the Observatory as the giant cell approached Mt. Hamilton’s foothills ten miles west of the summit. In every direction as far as we could see, storm clouds spiked jagged bolts and sheets of rain into cities and bordering hills. For nearly two hours I continued to shoot while ‘safety officer’ Rem monitored cells which surrounded us, counting eerie interludes between flashes and thunderous explosions, and marveling as mega-amps discharged into the ground. It was like being on a surreal sci-fi movie set.

The storm continued overnight and well past daybreak. It was the most chaotic and photogenic lightning event I experienced in eighteen years of residence at Lick Observatory.

The photographer extends sincere gratitude to University of California Observatories astronomers and staff for their generous and invaluable assistance in producing this photograph.